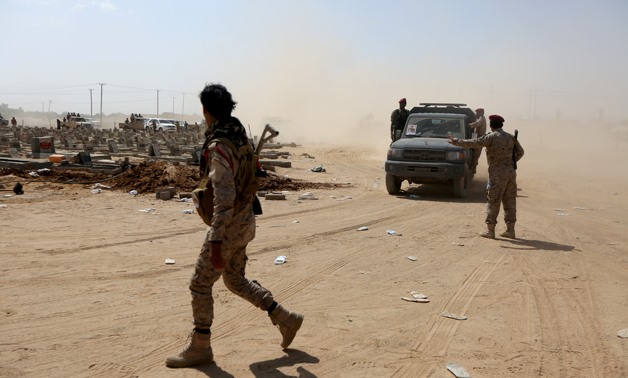 File-Yemeni army soldiers secure the site of a funeral for a Yemeni army officer killed in Abyan in clashes with UAE-backed southern separatist forces, in Marib, August 31, 2019. REUTERS/Ali Owidha/File Photo

CAIRO – 4 August 2022: Egypt welcomed the UN announcement of the extension of the truce between the conflicting parties in Yemen for two more months until October 2, said Egyptian Foreign Ministry in a statement on Thursday.

Egypt has hoped that the extension of the truce will contribute to reaching a comprehensive settlement of the Yemeni crisis and support initiatives for a political solution that preserves Yemen’s unity and independence, the statement added.

“The extension includes a commitment by the Government and Houthi rebels to intensify negotiations to reach an expanded agreement as soon as possible,” the UN said on August 2.

In April 2022, President Abd-Rabbu Mansour Hadi conceded power to the eight-member PLC led by Alimi in an effort to stabilize the country and face the Houthis.

Since then, Yemen has seen a relatively quiet situation in light of a UN-sponsored truce between the internationally recognized Yemeni government that is backed by Saudi Arabia; and the Houthis, who have been fighting since 2015.

Egypt welcomed the truce that was reached on April 2 and then extended for two more months on June 2, expressing hope that this truce would contribute to supporting political solutions.

In the same month, Egypt announced allowing direct flights between Cairo and Sanaa for the first time since the conflict started, a step that has been hailed by UN Secretary-General Antonio Guterres.

In a statement on the UN-mediated truce extension in Yemen, Biden commended the decision made by Egypt and Jordan to open their airports to flights from Yemen “thereby enabling a key component of the truce process”.

Egypt-ICF to take place from September 7 to 9